Story of a Thriiver surviving through all odds, even death! | Thriive.in

Blog » Inspire » Story of a Thriiver surviving through all odds, even death!

Story of a Thriiver surviving through all odds, even death!

“My parents were my idols and I was impressed with the respect they, as doctors would get – it was next to God. So, even I decided to become a doctor.” He stood like a fighter, and spoke with the kind of softness and warmth inherent to those who’ve battled life, and proudly won. Dr. Anil Suchak, Medical Director of Suchak Hospital, Critical Care Specialist and an Anesthesiologist seemed like another name for joy, with laughter lines around his eyes in just the right amount; the one to explode into “I am a Thriiver” any second. I had been anticipating this interview with him  for the “Are you a Thriiver” series, having heard his tales of strength and faith before. And here I was, getting impatient to hear about it all directly from the winner at what we know as life.

“During my internship, I was posted to a small rural village, Goveli. On 11th September, 1978, I was overtaking a three wheeler tempo near Sangam Talkies when it took a turn on the right and pushed me on the divider. I fell on the opposite side and got in the way of a speeding truck coming from the opposite side, which further pushed me 30-40 feet away. I had multiple fractures in the spine along with an organ rupture in the abdomen. With severe pain, I realised that something major was happening. The bystanders picked me up and as they spoke of taking me to Cooper hospital, I asked them to take me to my father, to Suchak Hospital. My BP had dropped to 60 millimetres by the time I reached, and to 40 by the time I was taken into the surgery. My spleen had ruptured. Ten bottles of blood were pushed into me. I had a cardiac arrest on the operation table but I was revived.

I remember distinctly before the surgery, that I had a very sinking feeling and telling my father that I would not be able to make it. But my father wasn’t the one to give up that easily and took this as a battle between him and God where he had no choice but to win. With his power of belief, I had a successful operation and recovery in 4-6 weeks”, he leaned back in his chair, exposing the crisp white shirt he was donning that looked like it hadn’t seen a crease since days.

I didn’t fail to notice that there was a little twinkle in his eyes, the kinds that remind you of all things sweet and soft. His voice left a lingering taste of his emotions in my heart as his story unfolded right in front of me. I let out an unintentional breath of relief to hear about his recovery until he mentioned that he hadn’t actually completely recovered.

“I finished my studies, got married, was blessed with two children and devoted all my time to my family and the hospital I continued after my father. It was all going like a happy dream albeit that one day, after nine years, I contracted jaundice. At first, I thought it was nothing to worry about but later I figured that the enzymes of my liver were rising high for the last 6 months. When the diagnosis didn’t turn out to be either Hepatitis A or B, I was advised to go to England for a liver biopsy. After one year of my surgery, the enzyme was labelled as Hepatitis C. And the treatment continued from 1990 to 2005, where I took 4 courses of different drugs, but was never cured as the enzymes only got temporarily suppressed.

In 2006, my liver became cirrhotic and my face started becoming dark, along with swelling in my legs and fluid in the abdomen. For the next 3-4 months, I was in and out of the hospital and by December that year, the condition worsened so much that the doctors said if the transplant was not done, I might not survive. During that time, I heard of a new centre which had come up in Delhi for liver transplants. When we went to meet the doctors, one of them said that he had done about 35 transplants, with reasonably good results of about 80-85% survival rate. That kind of assured me but to be more confident I asked him for the list of patients and their numbers so that I could meet them to know how they were doing after their surgery. Even though my wife wanted to be my donor, she was diagnosed with a fatty liver. That meant if she gave me a part of her liver, there would be risk to her life. While I was contemplating this matter, I got in touch with my Gurudev Swami Chidananda, who was the head of Divine Life Society.

He said, “don’t worry, something will come up”. One of the saints close to the family, Swami Yatidharmanada from the Ashram heard our conversation. He went to the hospital lab to check his blood group which turned out to be the same as mine. And the next thing I knew that the day after that, he took a bus for Delhi and suggested that he would like to give me a part of his liver. It didn’t sit right with me. I had always learnt to take only education and learning from a saint, nothing more. I almost had tears in my eyes as he said to me “you are a person who has saved thousands of lives. If I give a part of my liver, what is the big deal? You will save more lives. How is that bad?”, his face split into a grin as he gave words to his emotions. It wasn’t a funny grin but was more like a wave of joy which he must have thought wasn’t of much use keeping inside. He put his fingertips to his cheek and went into silence for a couple of minutes, which gave me a chance to sip on my almost turning cold ginger tea kept on my left, next to the family frame of the young Doctor.

So, who was the real god? – I thought to myself. The one who saves many lives or the one who saves one life so it can save many more! The silver of his hair was shining in the reflection of the mirror, which every now and then was dissected by his loveable smile, only removed from his lips when he wanted to sound serious. I was only lost in the ‘godly’ contemplation when he continued.

“It was uncommon to have an unrelated person donate an organ. So, we were almost sure that my request would be 100% rejected by the government committee. They asked Swamiji, “You have already renounced the world, why are you attached to this man? You should not have any attachments as per what you preach.” And he replied, “I have no attachments. But if a part of my organ can give him some additional life, I am very sure he will save many more.” That gave me the opportunity to be the first case of an unrelated donor.

My surgery lasted for 22 hours and I was on the ventilator for about 2-2½ days, completely unconscious. But one day before my surgery, I had started reciting mantras as I had tremendous faith in the universe, in the super power. Things started falling into place and I realised that everything conspired because I was to be helped. Along with my Guru mantra, I also recited Maha Mrityunjaya Mantra. I was still in the hospital when on the 9th day the doctor told me that I would have to be re-operated due to a complication. At this point I felt that God was testing me.

Many members of my hospital staff  decided to go barefoot from Malad to Siddhivinayak Temple praying for my life. 3000 school children of Nutan High School, Actor Irfan Khan, who is a friend of mine, along with his wife Sutapa, the mosque opposite my hospital, my brother’s daughter, who is a Buddhist, and the Divine Life Society, everyone conducted prayers for my speedy recovery and well-being.

And the result? In 3 months time, I was perfectly fit to walk 6-7 kilometres at a stretch. I started getting calls from all over the country, and I also made a web page for those who needed any advice or information about liver transplants. I made it a mission to bring awareness about organ donation as well and started giving lectures at different places, while regularly counselling patients with end-stage liver disease and their families.”

“I am a fighter, I never give up that easily in life. And this has been my attitude ever since I remember learning it from my father. And about God, I always tell my patients to have faith in their God, and that the rest I would handle because I know that I have faith in mine. How could anything then, possibly go wrong?”, he ended on this note while placing his glasses over his nose to look down at his iPad which he opened in front of me right after. As he scrolled through the screen, the light kept on adding to his shining forehead and then to the tip of his nose. My eyes fell on the electronic pages and I could sense that as the wrinkles would deepen over his face, so would the positive effect of his life on others.

Sometimes, we forget that our creator is within our own hearts. He is as real as this earth, the sky, the people, the wind and the water. We only have to keep our hearts open to the power of his love. Do we need any more advice than that? 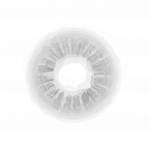